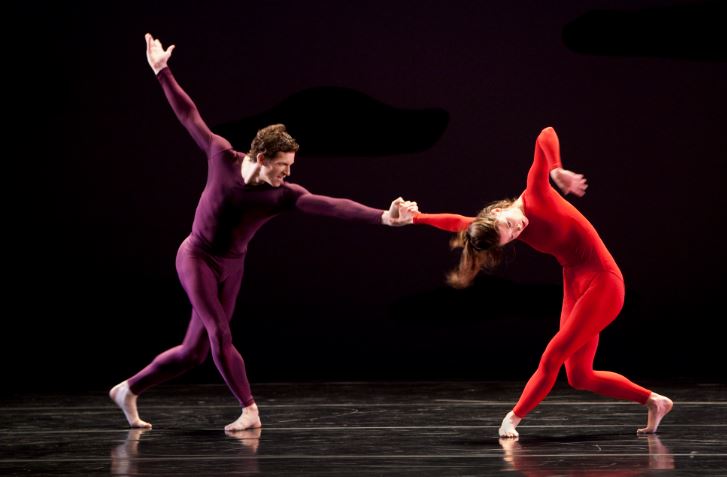 Notes: With its performances in 2008, Paul Taylor’s legendary Scudorama returned to the stage for the first time in 35 years. The title combined the type of clouds that race across the sky before a storm with a 1960s term for “bigger and better” that to Taylor connoted “tacky.” In his autobiography, the choreographer termed Scudorama a “dance of death leavened with light touches.” The dance dates from 1963, when Americans were still in the grip of nuclear fear following the Cuban missile crisis. Taylor was keenly attuned to the anxiety of the era and expressed these unresolved tensions in the dance, which carries a program note quoting Dante: “What souls are these who run through this Black haze… These are the nearly soulless whose lives concluded neither blame nor praise.” Clarence Jackson’s commissioned score and Alex Katz’s set and costumes contribute to the work’s unsettling aura. Scudorama touched a chord with audiences from its very first performance (given in silence due to the loss of the orchestral score) and remained among the Company’s most popular pieces for a decade. Its renaissance marks the return of a piece of American dance history.

“It’s been in hibernation for 40 years! And what a work it is. Made immediately after Taylor’s first great hit, the buoyant and sunlit Aureole, Scudorama – dark and desolate – was a deliberate rebuke to Aureole’s joyous optimism. It’s a view not of hell, though, but of purgatory; hell was to follow… Almost no one in the audience had ever seen Scudorama, and it was a revelation – a blazing declaration of Taylor’s talent. You can see in it not only his future but aspects of his past.” – Robert Gottlieb, New York Observer

Sean Mahoney and Laura Halzack, photo by Paul B. Goode